In celebration of “Rogue One: A Star Wars Story” opening this weekend, we have a special Star Wars edition of Drawn to Manga!

The complete screenplay of the original movie adapted as a manga!

Star wars: the empire strikes back
[illustration by] Toshiki Kudo ; [based on an original story by George Lucas ; adapted from a screenplay by Leigh Brackett and Lawrence Kasdan]
1999 – Dark Horse Comics

A manga adaptation of the movie “Star Wars Episode 5: The Empire Strikes Back”. 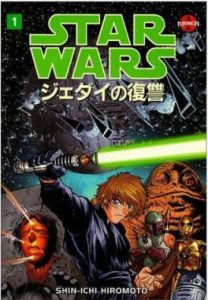 A manga adaptation of the movie “Star Wars Episode 6: Return of the Jedi”.

Check out our catalog for more Star Wars titles.

In celebration of “Star Wars: The Force Awakens”, coming to theaters December 18th, we are featuring PBCLS’ collection of Star Wars comics. Check out our catalog for more titles from our collection.

The original comic adaptation of the greatest space-fantasy film of all is remastered for the modern age Weeks before George Lucas’ first “Star Wars “film hit theatres, Marvel gave fans their first look at Luke Skywalker, boldly asking: “Will he save the galaxy, or destroy it?” You may know the answer, but that doesn’t spoil the fun of seeing “Star Wars: “Episode IV – “A New Hope “like never before…including scenes that never made the silver screen When Princess Leia is taken prisoner, Luke, Obi-Wan Kenobi, Han Solo, Chewbacca, C-3PO and R2-D2 ride to the rescue and take on Darth Vader in his awesome Death Star.

Here begins the tale of the dawn of the Jedi, the “Star Wars” of 25,000 years ago–before lightsabers, before hyperspace travel, before the Jedi spread throughout the galaxy, when connections to the Force were new.

On the planet Tython, a group of beings–scientists, philosophers, and warriors–strive to maintain peace and to balance the mystifying power known as the Force. But a stranger is coming, one who will disrupt the balance with his arrival and his own connection to the Force. Everything in their system is about to change… The doors to the galaxy have been opened.

The original Dark Lord of the Sith stars in his first ongoing series Ever since Darth Vader’s first on-screen appearance, he has become one of pop culture’s most popular villains. Now, follow Vader straight from the ending of A NEW HOPE into his own solo adventures – showing the Empire’s war with the Rebel Alliance from the other side But when a Dark Lord needs help, who can he turn to? As Vader pursues a very personal vengeance against the Rebels and investigates the Emperor’s secret machinations, he clashes with weapons scavenger Aphra and deadly Battle Droids, and returns to Geonosis to build an army. But some very powerful people don’t want him to learn the truths he seeks.

A traitorous uprising against the fledgling Galactic Empire leaves Emperor Palpatine close to death. Saving the Emperor–and the Empire–appears to be a lost cause… unless Vader can uncover the secrets of the Jedi Council and locate the mysterious “Ghost Prison.”

This month we are featuring some wonderful books from our Spanish Graphic Novels collection. 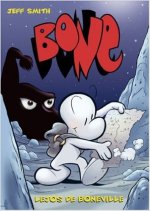 After being tossed out of Boneville for cheating the citizens, three cousins find themselves mysteriously trapped in a wondrous but often END_OF_DOCUMENT_TOKEN_TO_BE_REPLACED

Here’s a peek at our upcoming July programs. Be sure to check the PBCLS Calendar of Events and our Happenings brochure for more programs near you.

END_OF_DOCUMENT_TOKEN_TO_BE_REPLACED

The Yuuzhan Vong invasion (25 after the Battle of Yavin) was the focus of the New Jedi Order series of books, starting with Vector Prime in 1999. This new comic book series, I assume, will tell the untold stories of the invasion. And, like most Star Wars fill-ins, features an extremely important character you’ve never heard of.

Finn Galfridian of Artorias is saved by the New Republic when his homeworld is taken by the Vong. Leading the rescue mission is Luke Skywalker, who detects Finn’s connection to the Force. Luke begins training Finn, alongside the Solo children, but the question is: will Finn’s anger towards the Vong lead to his undoing?

Running parallel to this, Kaye Galfridian is trapped in a slave ship with the rest of Artorias’s survivors. There she ingratiates herself with the Vong captain — but what are her true motives?

Dark Horse has found an interesting way to revisit a decade old storyline. It helps that the Vong are like fanboy-designed badasses and major franchise characters are used judiciously. Really good art too — I especially loved the detail in the Nar Shaddaa panels.