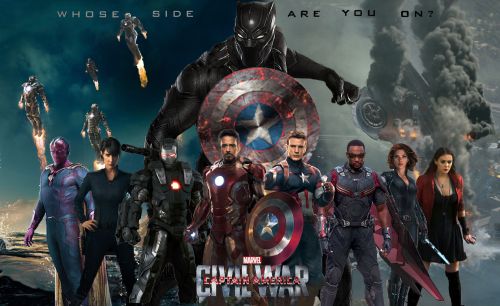 Marvel’s Captain America: Civil War opens this weekend! Some of us may be lucky enough to see it tonight but, for those of us who have to wait, we can prep and catch up on the history of Civil War via the comics. 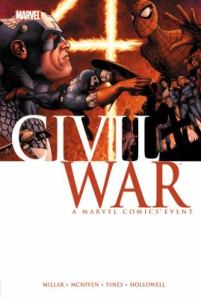 A conflict has been brewing from more than a year, threatening to pit friend against friend, brother against brother – and all it will take is a single misstep to cost thousands their lives and ignite the fuse As the war claims its first victims, no one is safe as teams, friendships and families begin to fall apart. Contains materials originally published in magazine form as Civil War #1-7, Marvel Spotlight: Civil war, and Civil War script book.

Ripped from the pages of New Avengers, the Eisner Award-winning team of Brian Bendis and Alex Maleev present an explosive hidden story of Marvel’s secret past, the secret history of Marvel’s most secret team – how they came together and how they are ripped apart. Plus: Spidey’s got a new lease on life, new powers and a new costume, courtesy of his new best friend Tony Stark. So what could possibly go wrong? With clouds quickly building on the horizon, the bonds that Spider-Man now forges may very well determine his capacity to withstand a coming storm. The Marvel Universe is about to split down the middle, and the line is drawn here! You will be asked: whose side are you on? Collects New Avengers: Illuminati; Amazing Spider-Man #529-531; Fantastic Four #536 & 537.

Captain America has fallen into a clash with his government and his friends, and the people close to him are paying the price. Sharon Carter’s life is torn apart as her superiors use her divided loyalties against her. The Winter Soldier comes face-to-face with Cap, but which side will he choose? Then, get inside Tony Stark’s mind, and learn why he feels that only he can lead the charge for superhuman registration In the midst of the war, Captain America and Iron Man meet secretly. COLLECTING: CAPTAIN AMERICA 22-24, WINTER SOLDIER: WINTER KILLS, IRON MAN 13-14, IRON MAN/CAPTAIN AMERICA: CASUALTIES OF WAR, CIVIL WAR: THE CONFESSION.

The Royal Couple, King T’Challa and Queen Ororo, embark on a diplomatic tour that will have them spanning the globe – and beyond! Stops include Latveria (Dr. Doom), the Moon (Black Bolt and the Inhumans), Atlantis (Namor the Sub-Mariner) and the Civil War-ravaged United States, for a meeting with none other than the point man for the U.S. government’s implementation of the Superhuman Registration Act: Tony Stark, T’Challa’s former Avengers teammate. Will the Black Panther and Storm decide to get off the sidelines of the Civil War and get involved? Collects Black Panther #19-25.

The Punisher is back – with a vengeance. And he’s taking no prisoners…literally With Civil War in full-throttle mode, Frank Castle is feeling the heat. His safe houses have been raided and his munitions seized, and he’s square in the crosshairs of a Marvel Universe big gun who always gets his man. Until now, this wasn’t Frank’s war. But when spandex-clad baddies start carrying badges – well, let’s just say that’s something the Punisher can’t abide. Frank Castle doesn’t play well with super heroes, and they don’t play well with him.

If you’re looking for more Civil War, check our catalog or your local library!

Iron Man etc. belong to Marvel, Disney and who ever else actually owns the rights (i.e. not PBCLS)

Iron Man 3 hit theaters this weekend and has received mixed reviews. Critics LOVE it (and so do I) but some die-hard fans are disappointed by some major changes (no spoilers, I promise). I recommend catching it in 3-D IMAX, if you have the opportunity. The action is thrilling and the plot’s not bad either.

There’s still time to rewatch the first two movies before you enjoy the third. The Avengers movie comes up on the search for “Iron Man” and “Robert Downey Jr.”. Take it as a sign to watch that movie, too – it’s relevant to Iron Man 3. Pick up your copies at your local library branch or place holds on them today so you can have them before the weekend. You won’t regret it*.

*Disclaimer: If you have school finals this month, please study for them before starting your amazing Marvel Movie Marathon. The library encourages the use of study rooms and reference materials as well as reading, in general, and graduating this semester.

This month Drawn to Comics is highlighting Iron Man, but most updates will feature new titles in the system.

Subscribing to Drawn to Comics is the best way to get your hands on our new titles!

1. He loves his Twinkies.
Blame Iron Man and every other comic book character for Comic Book Guy’s girth. Starting in the 1970s, Hostess launched a series of ads featuring superheroes (and villains) shilling for their popular pastries. Invariably the snacks were used to thwart crime, like this panel pulled from Iron Man in A Dull Pain where he goes up against Monotony Man. See more Hostess Ads lovinging collected by Tomorrow’s Heroes.

2. He sounds like Animal House’s Dean Wormer.
Iron Man made his first animated appearance in 1966’s “The Marvel Super Heroes” cartoon series. Voiced by future Animal House antagonist John Vernon (who also did Sub-Mariner), Iron Man appeared on the Wednesday episodes of the five nights a week show. Being extremely low budget, this series was created by photocopying art from comic books and then adding small amounts of animation.

3. He’s heavy, too.
Wolverine’s adamantium-laced skeleton puts him around the 300-lb mark, making him a lightweight compared to a 425-lb fully suited Iron Man. Of course, the question is which suit? Iron Man’s suits have more powers than Superman and cover more emergency situations than Batman’s utility belt. He has Hydro Armor, Arctic Armor, Outer Atmospheric Armor and two types of Hulkbuster Armor just to name a few. And that doesn’t even count weird stuff like the Extremis Armor.

4. He’s richer than Batman.
Every year Forbes Magazine releases their Fictional 15, a list of the richest non-existing people. Bruce Wayne comes in at #7 with a paltry $6.5 billion – peanuts compared to Tony Stark (#4) at $8.8 billion. Forbes was especially impressed with Tony Stark’s handling of Congress noting that “shares of Stark Industries stock up over 20%” after Stark refused to turn over the Iron Man technology. Of course he has a way to go before taking the #1 spot from Twilight’s Carlisle Cullen, who’s sitting on $34.1 billion.

5. He’s a zombie.
If you jump over to Iron Man’s Marvel Universe Character Bio, you’ll see that he’s categorized under “People who used to be dead but aren’t anymore.” Yes, everyone in the Marvel Universe could fit into that category, but Stark earns this repeatedly through faked deaths, paralysis, comas, brain death and more. Thankfully his medical team includes Dr. Strange and Thor. Of course, Iron Man is also a full-fledged Marvel Zombie, if you’re looking for more traditional undead.